Yesterday on Saturday, I went to my first scout-a-rama. I was hoping there would be a lot of people off of staff for Aspen Ridge to come and help with games. It turns out though the only people that showed up was me and the nature director, Erica. We didn't know what to do so we ran around for over an hour and a half singing/screaming songs to scouts to try and entertain them. It sucked. They were all so unenthusiastic about it all. It took them a while for even one or two of them to start singing or doing the actions. It was pretty sad. It was a lot of fun though.
That’s about all that happened this week. On Tuesday, I have a band concert at 7. It's our movie themed concert so we are playing songs from movies. It should be a lot of fun if you want to come. It's at Ben Lomond.
Have a great week.
Love ya,
Aimee
Posted by Aimee at 19:55 1 comment:

A Meeting and a Joke

On Saturday, I went up to Aspen Ridge for the last and final meeting before I go up there to work. It was a long hard day. We clean out the lodge and cleared some of the trails. Someone had actually broken in and kicked down a door so a raccoon had came in, gotten in some of the food, and pooped EVERYWHERE! It was really gross.
Brittney said I had to post this joke. There is a bit of a story to it before I tell you though. On tour we had dinner on a cruise ship and the people working there were handing out drinks without alcohol to the students. My band teacher, Mr. Jensen, got one and it was clear so he thought it was water so he had a drink. He then found out that it was champagne. He was tipsy all that night and the next day and even had a hangover. It was so funny. Well the next morning when we were waiting for everyone to get on the bus so we could go, Mr. Jensen told us a joke. It when something along the lines of this,
Why did the monkey fall out of the tree? Because it was dead.
Why did the second monkey fall out of the tree? Because it was stapled to the first monkey. Hahahaha…
Well I hope you all liked the joke.
Have a great week!
Love ya,
-Aimee
Posted by Aimee at 19:03 No comments:

Not too much has gone on since I last posted.
Prom was a lot of fun. We went to Ruby River for dinner. We couldn't find the other guy in my car's date's house. We thought she lived in North Ogden but she actually lived in Pleasant View. We were about an hour late for dinner and we didn't get to the dance until an hour after it had started. It was so much fun though.
That next week I went up to California for a Jazz Band competition. We didn't do too badly but we had played all those songs better. That happens every time we do a competition. It is a lot easier to play our instruments in California so the trumpets kept overshooting the notes on Sesame Street and playing them too high. That song sounded absolutely horrible. I was surprised we got the score we did and it wasn't lower.
Then on Thursday I went up to Woodbadge for the first time. It was a lot of fun teaching adults but it was also very, very cold. I figured out you don't get much sleep up there. We ended up going to bed at midnight and waking up at 5:45 the next morning. I felt really bad because I kept almost falling asleep during the lectures type things we had. But it was loads of fun.
Track season is now over for me. Region is this Wednesday and Thursday but I'm not going. I still have the tendonitis in my ankle though.
That is about all that went on for the past few weeks.
Love ya,
-Aimee
Posted by Aimee at 16:50 No comments:

Here are my prom pictures. Sorry they are up so late. Between my dad stealing the monitor for Woodbadge and me getting grounded for sluffing an assembly I've been pretty busy. :) 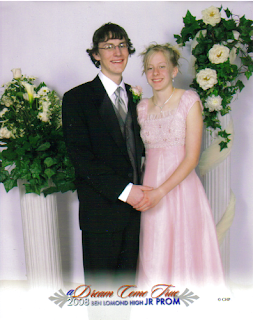 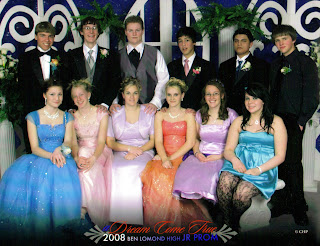 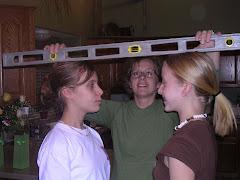 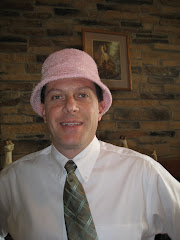